Earlier this week I ran a post-digital session with Rich Hall as part of the fringe (#falt09) activities around the ALT-C conference. We had an interesting time in the upstairs room of the Lass O Gowery in Manchester debating a series of statements which were designed to provoke post-digital thoughts, for example:

While these did lead to a lively discussion, I was still no clearer by the end as to how to describe post-digital as a concept. For many the term seems to imply a discarding of digital technologies as if they were no longer important. It also appears to promise some sort of new world order – which is not helpful.

After the fringe session I was even more convinced that the post-digital was a useful concept but that we hadn’t found the right way of expressing it yet. 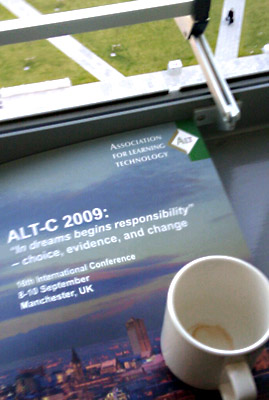 A couple of days later I gave my presentation at the ALT-C conference on my ‘Visitors & Residents’ principle. I had inserted a reference to the post-digital at the end of the talk to make the point that the Visitors & Residents idea rests on issues of motivation and personal preference rather than age or technical skill. This seemed to me to be a post-digital principle but, influenced by my conversations around the subject during the conference, I suggested that the term post-technical might be more appropriate.Ok so before I continue, yes this is a kind of semantic exercise, but what we have here I think is a strong idea which is difficult to express. One of the conclusions of the fringe sessions was that the rapid rate of change in technology is causing accelerated cultural effects which we are struggling to describe. (This was echoed in Michael Wesch’s keynote at the conference.) So I think it’s important to develop our thinking in this area even if it is a bit of a bumpy ride.

I can recommend Ian Truelove’s recent post on some of the pragmatic effects a post-technical approach can have in education. As Ian points out the technical is all about learning, and then following, a series of rules. Rules that we need to grasp before we can express ourselves ‘properly’. The manual for most software is written in this style – a button-pressing, linear approach. And yet the most successful (I’m thinking here in terms of uptake) online platforms don’t seem to have manuals. This is not necessarily because they are especially simple to use, but because they are massively multi-user and simply by watching the behaviour of fellow users it is possible to ‘pick up’ not only how to use the platform but also why you might want to use it. This should come as no surprise as we are particularly good at learning by observing fellow members of our own species. (There will be a fancy pedagogic/sociological term for this. If you know it then please insert it here as you read.)

Basic button-pressing, user-interface-comprehending activity is becoming culturally normalised and an ever-decreasing factor in our engagement with digital technologies (i.e. many of us are already digitally literate, if you will excuse the terminology). In effect our approach to technology need not be technical.

A simple post-technical example: the substantive effects of Twitter as a platform cannot be described by its technical functionality. Reading a technical manual for Twitter would not help a user to become resident in that online space. As Andy Powell suggests this in his ‘Twitter for Idiots’ post, individuals have to experience the culture of the groups/communities/networks/flocks/whatever to really ‘get’ what the platform is all about.

The post-technical then does not put technology second or first, it simply liberates the debate from those who build/code/provide the technology and puts it into the hands of those who appropriate it, the users, or ‘people’ as I like to call them, who write essays and poetry in Word, transform images in Photoshop, sustain friendships in Facebook, learn stuff by reading Wikipedia and express opinions in blogs.

The perspectives we are currently using, to come to an understanding of the cultural/educational influence of digital technologies and the opportunities therein, need to be reconsidered. I’m not sure yet if the answer lies in post-digital or post-technical approaches but I’m looking forward to tending these ideas over the next few months and seeing if something beautiful grows.