One effective way to learn is to use Social Media un-sociably. The traditional term for this is Lurking – hanging around a discursive space online without speaking up. It’s an inherently negative sounding term with connotations of voyeurism and surveillance – a fundamental aspect of not being embodied online. For example, if you attend a lecture but  don’t ask a question you presumably aren’t Lurking because people can see you?

I’d like to propose the more positive notion of Elegant Lurking. This involves learners following key people in their disciplines (fellow students, ‘thought leaders’ practitioners, academics etc.) within Social Media to tune into the discourses within the subject. Often this is an effective way to discover interesting and valuable sources of information on a topic, especially those in formats which aren’t formally curated anywhere such as blog posts.

The bonus for learners is the additional discussion around these sources which takes place when they are shared. Comment and opinion on the subjects tackled and the relative credibility of the author and/or the material itself are extremely useful when you’re new to a particular area. Elegant Lurkers are critically evaluating the critical evaluation of thinking in their area of study… part of which involves assessing the credibility of the people involved in the discourse.

The value of this mode of engagement has be highlighted by the various Visitors & Residents mapping workshops like the one we recently ran in Galway for Catherine Cronin. It’s common for individuals maps to contain a Resident style platform (Twitter, Facebook etc) in the Visitor side of the map. Often this is because the individual is Elegantly Lurking. They are not yet interested in being visible online in a learning context but they find watching the discourse very useful. 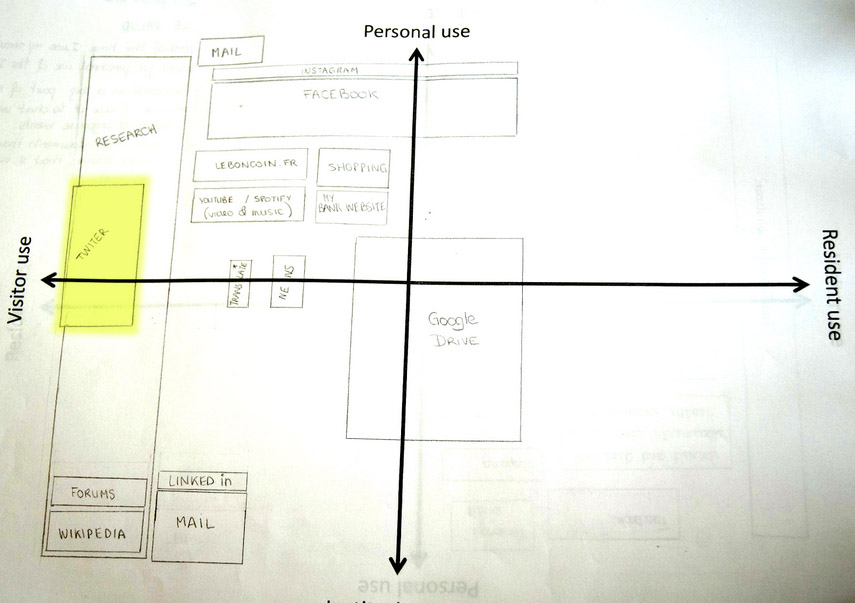 A map from a 1st year Post-grad students in the Arts and Humanities. Note the position of Twitter at the visitor end of the continuum indicating ‘Elegant Lurking’ in a Resident style platform.

All successful Social Media platforms allow for Lurking in some form. It’ allows individuals to tune into the ‘dialect’ of a particular network or community so that when they first decide to say something they’re reasonably confident it will be in an acceptable tone. Some learners will choose never to speak-up though, especially if they are following an intimidating network of venerable ‘thought leaders’ or if they assume they won’t be responded to. Others might find that they gain confidence over time as they come to understand the discourse in greater depth and discover that they do have something to say.

I’ve seen this numerous times where a student or someone new to a field signals that this is the ‘the first time I’ve commented on this’ or ‘I’ve written my first post on this subject and thought you might be interested’. This is an extremely important transition point for a learner from knowledge-consumer to active community member. It’s the point at which they are exploring their ‘voice’ within the discourse.

Supporting students to move towards this transition should be central to the overall trajectory of our pedagogy in more nuanced ways than simply assigning marks to the act of blog posting. Elegant Lurking is an important ingredient in the subtle business of becoming a member of a community.

This also highlights the mercurial nature of what it means to ‘engage’. The Elegant Lurker can be much more engaged than the noisy contributor and not being visible doesn’t mean you aren’t present. I worry that in the race towards quantifying engagement via analytics the more gentle, qualitative modes of engagement such as Elegant Lurking will be overlooked.