As the first Open Habitat pilot with Art & Design students draws to a close it’s worth reflecting on how the process has gone before we dive into the formal analysis of interview transcripts, surveys and building work in Second Life.

After 3 weeks of working infrequently in OpenSim and Second Life some of the Art and Design students seem to have got to that self motivating stage at which their creativity and their curiosity combine and the tutor facilitates when needed rather than leads by the nose. The atmosphere in the computer room and in Second Life (3 of the students were working from home) was relaxed and chatty. Not too much sign of the noob paranoia that could have bloomed from the first couple of teaching days.

A few informal impressions that I have come away with are:

1. Maybe ‘collaboration’ in these MUVE environments is more about discussion than construction. When people collaborate in world they are rarely to be found wrestling over the same polygons/prims. It’s more likely that one will be building while the other muses over what direction the build should take. In this way students can use the specific skill they are best at in a larger build (modelling, texturing, scripting etc) not unlike the RL equivalent of the trades.

2. Just how much of a motivator is knowing that there is a potential audience for your work in world? Does seeing those little green dots on the map inspire an individual to create or simply make them feel a little lonely? I can’t say that I have ever felt lonely using Adobe Photoshop (no map, no green dots) but as some of the students alluded to it’s an odd feeling knowing that there are people in world who have chosen not to talk to you.

3. If the students that have been inspired can produce work like the example below in three weeks, what could they achieve in three years? It’s the length of a degree after all and it’s worth remembering that even the most experienced Second Lifers (the penal inference here may be apposite) have only been in world for about this length of time. 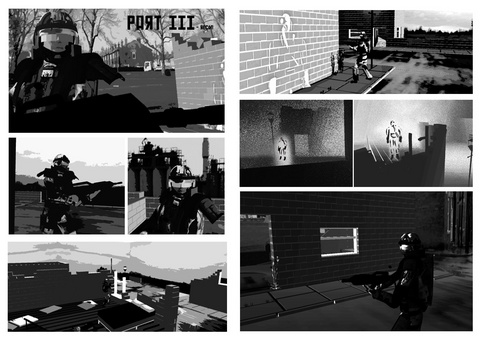 There were two significant transition points for the Art & Design students involved in the first 2 days of Open Habitat’s first pilot. Take a look at Ian’s post for a description of what happened from a teaching practitioner’s point of view.

Here is my perspective on events with my researcher hat on:

This sequence of events slowly expanded the amount of technical and social options available to the students. They started in a safe, private, stand alone OpenSim environment in which they could learn building skills without getting tangled up with issues of identity and communication. The first transition point came when we paired the students onto OpenSim islands (i.e. each student was on an island with one other student). There was a distinct shift in atmosphere as they experienced the effect of being co-present in world and the real life room suddenly had a buzz in it as the students ‘met’ each other in the virtual world. This was amplified when a game of hide and seek was suggested and avatars started to dash around the screens in XY and Z dimensions (an excellent ‘quest’). The students flicked between real world and in world chat as the games progressed. One pair discovered that they could throw objects around in world and appeared to be attempting to trap each other inside large spheres in what looked like a surrealist version of a fight between two super heroes. This was transition point one, when the activity shifted from simply learning a piece of software to co-habiting the same virtual space with all the attendant social effects.

The second, less satisfying transition came when the students moved into Second Life. The ‘gateway’ of orientation island jarred the movement through the planned activities. The pilots suddenly became more about Linden Labs Second Life platform and a lot less about Art & Design. This is not to say that the students floundered, in Second Life terms their OpenSim experience had pushed them past the ‘Second Life pain barrier’. In fact one of the students started to give a new Second Lifer advice after being in world for about 2 minutes! The problem was that the Art & Design focus had lost its flow. Later on in day 2 of the pilot, once all of the students had been grouped and found their way to LeedsMet island, the Art & Design angle re-emerged. The students took-up plots of land and started to build.

So the pilot had created a smooth expansion of possibilities by initially separating the creative aspects of the MUVE from the social aspects. We do of course hope that these two areas will become intertwined as the pilot progresses but like most siblings it would seem that it can be healthy to separate them at times. The question that is hanging in the air after the first 2 days of the pilot is: once OpenSim has reached version 1.0 (currently 0.6) why use Second Life? Or in more constructive terms: maybe the educational institution should use OpenSim to control the flow of options to the students and provide a jumping off point which they can use to go into Second Life if they choose to?

Clearly there are advantages to being part of the wider community of Second Life but we need to develop methods of making the transition to the big complex world of a public MUVE smoother. At the top of the list of possible solutions is finding ways of getting into Second Life without going via orientation island.