New things are exciting. For example social networking. It’s a whole new way to interact with others, a reason why society is moving online isn’t it? But how to make it useful? What can we do with this new digital tool that goes beyond chit-chat? It should be possible to use facebook and Twitter for something of value for education but which one is better? Which one is more popular? Maybe there is something new just around the corner? …What could we do with Google Wave?…

I admit that I have a habit of thinking in this manner. It’s exhausting and somehow hollow. On a bad day I get a form of techno paranoia which involves creating a profile on any number of new services most of which I never revisit. To be totally honest some of my most successful conference presentations are attended by an audience 50% of whom are driven there out of a mild form of this paranoia. I like ‘new things’ and I enjoy talking about what new developments could mean for education but at times I have been overwhelmed and lost focus. 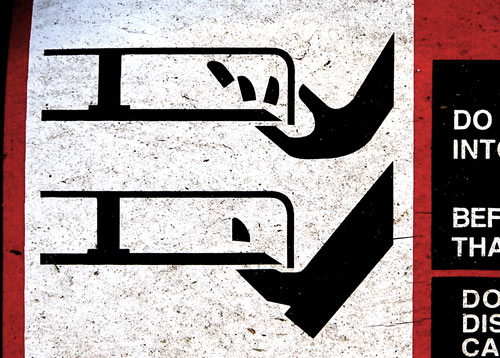 The Dangers of Being Digital
http://www.flickr.com/photos/calliope/49634405/

I have been numbed by a tidal wave of the new:

“The speed of the change, however, has left us with the mistaken belief that social change was somehow ‘created’ by the digital rather than simply played out on a the canvas of the digital; that the digital itself is the main driver of change.”

This quote comes from a working document outlining the postdigital. A principle which highlights the dangers of assuming the digital is the sole driver of change and makes the point that the digital as ‘new’ will quickly pass away.

As the ‘Planning for the Postdigital’ document describes all technologies go through a transition whereby they become culturally normalised. For example, the pen and the book have become ‘transparent’ tools, extensions of ourselves to be used appropriately to achieve goals but rarely discussed in of themselves. In the same way email and word processing are well on there way to becoming transparent. We now send a message or write a document. The digital is not discussed. It has ceased to be new.

“Things digital will be accepted alongside our other technologies and the slate swept clear of many of the distracting dualisms (and technological factions) that pervade the educational discourse. The postdigital frees us to think more clearly and precisely about the issues we face, rather than become tied to an obsession with, and the language of, the new.”

Too much time is spent arguing about the relative merits of digital spaces such as Twitter and facebook. The key term here being ‘relative’. We are pitting digital against digital, new against new, a form of one-upmanship which distracts from the larger picture.

“The transition to a postdigital way of thinking allows for that previously coded as ‘digital’ to be woven into the wider discussion of social dialects that people bring to their acts of collaboration. One of the things we’ve learned from social research is that people tend to go online to find people they know and tend to replicate, at least in part, their social performances online. These performances, the communities that they occur in and the dialects that they represent and produce should be the critical loci for research in the postdigital age, not the technologies themselves.”

During the recent Open Habitat project, activity in a digital space (in this case Second Life) forced us to reflect upon and change our educational approach in day-to-day non-digital spaces. As this mirror effect emerged I became increasingly uncomfortable. We had set ourselves the goal of discovering new ways of teaching with new technologies not re-considering the nature traditional teaching. Worse than that, because Second Life supported a high level of social interaction the skills needed to teach within the digital space had a large overlap with those needed in a physical classroom. “When are you going to tell us something new” was the comment I received halfway through one presentation on the project.

I of course should not have felt uncomfortable but at the time my thinking was locked onto the digital and what it could provide that was new rather than what it brought that was of value. The Open Habitat project discovered approaches that were of relevant both online and offline. I needed to adjust my thinking to accept that this was valid, that it was ok to revisit age-old principles of socialisation and collaboration. The new technology could be a catalyst for this thinking even if it wasn’t the ultimate home for all of the what we had learnt.

The discourse that surrounds elearning (an ‘e’ which is increasingly redundant) is in danger of stagnating. As the digital becomes increasingly transparent we are likely to find ourselves squabbling over ever smaller chunks of newness. We will become like tadpoles in an evaporating pond, fighting for the last of what will inevitably disappear. Maybe it’s time for a metamorphosis in approach, away from the digital, towards the postdigital.

10 thoughts on “Postdigital: Escaping the Kingdom of the New?”