Following on from my ‘That Was an Interesting Experience’ post I got to thinking about how to define what makes MUVEs distinct from other online spaces. The diagram below is my attempted answer, a diagram which I ‘trailed’ in my presentation at the Eduserv+JISC/Cetis Virtual Worlds event last Friday. (slidecast of the presentation at the end of this post) 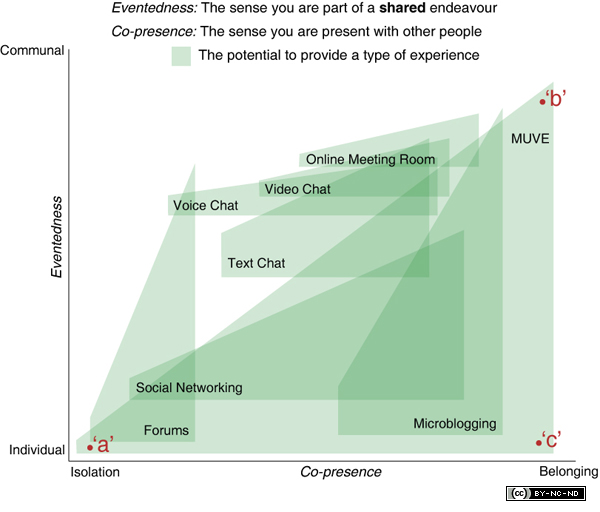 During the JISC funded ‘Open Habitat’ project we piloted Second Life with art & design undergrads and with lifelong distance learners studying philosophy. The axes of the diagram represent two of the major effects we saw across the pilots that are central to what an MUVE provides.

Eventedness: (a term coined by Dave Cormier and myself) This goes beyond a shared experience which could be aimless in activity terms and assumes that everyone involved is heading towards a particular goal even if this goal does not involve close collaboration. For example, a themed philosophical discussion which, if it goes well, should have a shared direction as the learning moves forwards.

Co-presence: As well as the Co-presence that comes from being embodied as avatars this definition includes what is experienced when an individual is certain that their contribution (usually in text form) will be read and responded to by others. For example it is possible to get a strong sense of the presence of others when microblogging because the exchanges are often frequent, they often reference each other and the response time can be a matter of seconds. Messages are linked to the particular point in time and their value erodes over time. There is a relationship between the speed in which the value of nodes of communication erode within a technology and the potential for Co-presence. In addition the individuals’ level of trust that their contribution will be understood and responded to within a particular technology has a large bearing on both Co-presence and Eventedness. It is of note that there is very little latent social presence in MUVEs. When you log-off your presence all but evaporates leaving almost no trace of your identity or that fact that you were in the MUVE. This is in contrast to social networking sites which are designed to extend your presence after you log-off. (See my ‘Visitors – Residents‘ post which discusses why this form of latent social presence is an important issue)

I should point out that the relative mapping of the technologies in the diagram could be debated until the cows come home because the axes are dealing with subjective terms. Individuals encounters with these technologies will vary greatly in the context of these terms hence the use of ‘potential’ which allows for a latitude in experiences.

A key point here is that the MUVE has the potential to support a huge range of experiences. This is partiality because of the effect of avatars but also because an MUVE is not a single technology but a cluster of tools gathered around a 3D environment. To tie this down a bit I will run through the types of experience that I think take place at points ‘a’, ‘b’ and ‘c’ on the diagram.

‘a’: At this point an individual feels isolated from others and alienated by the environment. They are directionless and have not discovered the ‘point’ of the environment for themselves. This sense of isolation and alienation is amplified by the knowledge that there are others in the MUVE who are enjoying being part of a social group that they are excluded from (either socially or because of a lack of technical skills). It is also amplified because they can see other avatars who appear to be much better looking, better dressed and with more elaborate hairstyles. They begin to fell anonymous, unskilled and lacking in a definable persona (they are part of the homogenous ‘n00b’ category). All of this is compounded by the fact that it is very difficult to ‘lurk’ in an MUVE. There a few opportunities to learn the in world culture(s) and mode(s) of communication that don’t involve social engagement. This is in contrast to other successful online social platforms have functionality such as an open chat channels (World of Warcraft) or the ability to see the flow of communication (Twitter) giving new users the opportunity to absorb the culture of that space before making their voice heard.

‘b’: At this point the individual feels like they are contributing to a shared endeavour, that they are part of a relevant activity. They have come to know and trust the other participants in their group and enjoy both the learning and the social aspects of the experience. This is only likely to take place if a member of that community has organised an activity. Or, to put it another way, the tutor has planned a relevant session. (The implication here being that the tutor needs to be part of a community of learners not above it in the MUVE space)

‘c’: At this point the individual is probably spending time with people they know and trust. They are socialising within the MUVE but are not attempting to achieve anything beyond simply being together. They are likely to feel part of a community but not that they are communally working towards a goal.

In terms of teaching and learning this huge breath of potential experience is what makes using MUVEs a high risk option. The better designed a session and the more responsive the tutor the higher it will map against Eventedness but a strong sense of Co-presence will only grow over time. Initially this happens as people get to grips with the technology then increasingly as they form relationships and trust grows. This breath of potential is in my opinion why a bad session in an MUVE leads to the suspicion that it would have been more satisfying and more effective to have simply used a straight text chat format or in some cases a traditional forum. This is compounded by the fact that MUVEs really lock you in and if a session breaks down it is complex and disruptive to sidestep to another format. Nevertheless, some of the most engaging and exciting online teaching and learning I have experienced has taken place in an MUVE.

As the diagram makes clear MUVEs do have the potential to outstrip many other technologies in their ability to provide a sense of belonging and purpose. However, if you don’t feel that words such as ‘belonging’, ‘communal’ or ‘experience’ are relevant to your practice then MUVE are probably not for you. Even for those of us that do think these aspects of learning are important MUVEs are a high risk option which require teaching sessions that are both well organised and highly reactive. We hope that the guidance and advice that comes from our experiences in the ‘Open Habitat’ project (to be published in March) will reduce this risk but it is like so many things in life MUVEs will remain a challenging option with the potential of great rewards.

Below is a slidecast of the my presentation at the Eduserv + JISC/Cetis Virtual Worlds event on 16/01/09 in Glasgow. Thanks to Rowin Young for providing the slidecast.